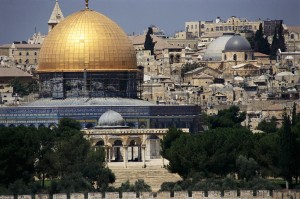 As recorded in Nehemiah 11, the wall around Jerusalem had been built and the leaders of the people lived within the city but enemies carried out plots to impede improvement so most people remained in their own towns. Since the continued safety of the city depended on inhabitants that would watch over the Holy city, they decided to cast lots so at least 10% would live within the city.

The enemies didn’t want the Holy city to be rebuilt but Nehemiah was on a mission. He had a purpose which motivated his life and gave him energy to keep going. Nothing was going to stop him. These are all qualities leaders should aspire to have.

There are also lessons in this passage we can learn from the people that faced danger within the city. Sometimes we have to go and live where others may not want to in order to be of service to God and a witness for Him. Being on a mission for God has some dangers just like the volunteers who watched over the Holy city but nothing worthwhile is without risk.

Many today say the movement called the church is an expansion of the Holy city into all the world and just like back in 445 BC there continues to be enemies plotting to destroy it. Through prayer, we can ask for courage to take on the dangers we face and truly experience a deeper relationship with God. We should seek God’s favor, be patient, happy to serve, hopeful, and look forward to the tasks God has for us.

Today, I’m praying for the specific task God has in mind for me. I believe this day with Him will be amazing because He will give insight into what part I need to play.

4 Responses to Doing our Part